This distinctive 'club-like' fungus can grow to 50 mm tall.

The surface of the fungus is smooth, round , grooved or somewhat flattened and irregular in section. The sterile base is a slightly lighter colour to the fertile upper section.

Habit:  Solitary or in small clusters.

Comments: May range from relatively common in some areas through to rare in southern areas of its distribution. Often overlooked as hard to see amongst leaf litter but easily recognised by its green colouring. 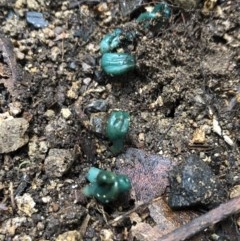 Your export is being prepared...

We'll email it to you as soon as it's ready.

Note: This process may take up to an hour.

Proudly Australian made, owned and hosted